Note that the expected value of a function of random variable can be found out directly by using the formula:

We can use the above described technique (using CDF) to derive the distribution of any general function $g(X)$ (not necessarily linear). The two step procedure is as follows:

Now we will derive a general formula for the PDF of $Y = g(X)$, when $g$ is monotonic. Assume $g$ is strictly increasing and differentiable. Let $h$ be the inverse function of $g$. Then,

Till now we have considered the case where $Y$ is a function of $X$ (linear / monotonic / non-monotonic). What if the random variable of interest $Z$ is a function of two independent random variables $X$ and $Y$? How do we calculate the PDF of $Z = g(X,Y)$ in that case? The method remains the same. We use the joint probability distribution of $X$ and $Y$ to somehow find the CDF of $Z$. Then we differentiate the CDF to find the PDF of $Z$. See Lec 11.9 for an example of the same.

Here we see how to calculate the PMF/PDF of $X + Y$ when $X$ and $Y$ are independent variables (continuous and discrete) and specifically when $X$ and $Y$ are independent normals ($X+Y$ is also a normal in this case). These are all special cases of the $Z=g(X,Y)$ scenario studied in Derived Distributions. Finally we study covariance and correlation. Covariance and Correlation play an important role in predicting value of one random variable, given another random variable (machine learning).

How do you calculate the value of convolution for a given value of $Z$ (denoted by $z$)? You flip (horizontally) the PMF of $Y$. Then shift it to the right by $z$. Finally, element wise cross mutliply the derived PMF with the PMF of $X$ and add each term together. This will give you the value of $\prob_Z$ for one specific $z$.

The convolution of continuous independent random variables $X$ and $Y$ is given by:

The mechanics of calculating the convolution are the same for the continuous case (flip, shift, etc.)

Let us now come to the specific case where $X$ and $Y$ are independent normal variables. Let $Z = X + Y$. 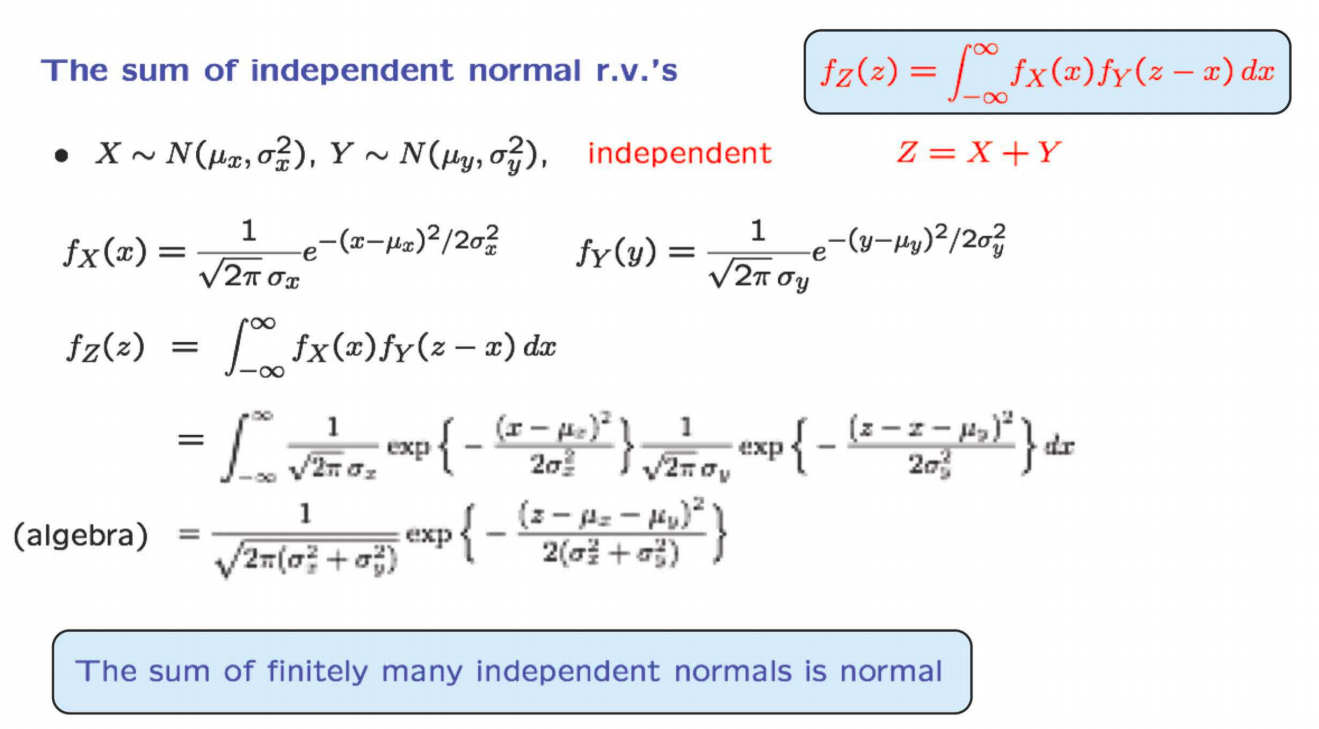 Thus, $Z$ is also a normal variable with mean $\mu_x + \mu_y$ and variance of $\sigma_x^2 + \sigma_y^2$. The mean and variance can also be derived easily using the Linearity of Expected Values and Linearity of Variances for Independent Variables. 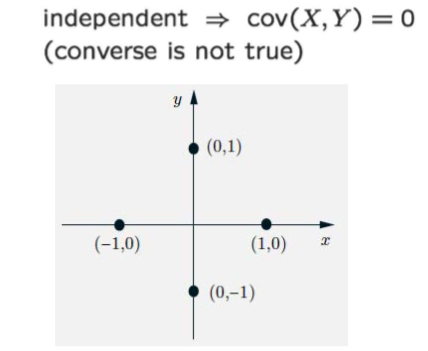 Notice that the correlation coefficient is the expected value of the product of z-scores of $X$ and $Y$. More on z-scores in a minute.

An important property of the correlation coefficient is that it always lies between $-1$ and $1$.

This allows us to judge whether a given correlation coefficient is small or large (because now we have an absolute scale). Therefore, it provides us a measure of the degree of “association” between $X$ and $Y$. Proof?

If $X$ and $Y$ have zero means and unit variances, then

Thus, $\rho^2 \leq1$. All this can also be proved if $X$ and $Y$ don’t have unit variance and zero mean, using somewhat more involved calculations.

Thus, unlike co-variance, correlation is not affected by linear stretching or contraction. This is an important property that makes correlation meaningful.

Side Note on Standard Scores

Standard scores (also known as z-scores) give us a way of comparing values across different data sets even when the sets of data have different means and standard deviations. They’re a way of comparing values as if they came from the same set of data or distribution. As an example, you can use standard scores to compare each player’s performance relative to his own personal track record—a bit like a personal trainer would.

Standard scores work by transforming sets of data into a new, theoretical distribution with a mean of 0 and a standard deviation of 1. It’s a generic distribution that can be used for comparisons. Standard scores effectively transform your data so that it fits this model while making sure it keeps the same basic shape.

Standard Score = Number of Standard Deviations from the Mean

Generally, values that are more than three standard deviations away from the mean (z-score > 3) are known as outliers.

Conditional Expectation as a Random Variable

The mean of $E[X \mid Y]$ is given by the Law of Iterated Expectations, which says:

In Lec 13.4 we use Law of Iterated Expectations to solve the stick breaking problem.

Conditional Variance as a Random Variable

In order to get an intuitive understanding of the Law of Total Variance, we consider the example problem of Section Means and Variances. We divide the entire set of students (sample space) into multiple sections. The experiment is to pick a student at random. Random variable $X$ denotes the marks of that student and random variable $Y$ denotes the section of that student.

total variance = average variance within each section + variance between sections

Sum of a Random Number of Independent Variables

This can also be derived using Law of Iterated Expectations: