PMF; Expected Values and their Properties

How do both the definitions lead to the same measure? Is it necessary that the frequencies in a large population will follow the probability distribution? Is the probability (likelihood) of an observation the same as its frequency when the experiment is conducted a large number of times? The intuition is easy to catch if we look at probabilities as frequencies. The mathematical proof is given by the Weak Law of Large Numbers (studied later in the note on Limit Theorems).

Consider an experiment where we randomly pick a student in a classroom of $n$ students. The weight of the $i^{th}$ student is $x_i$. If the variable $X$ is defined as the weight of the selected student, then $p_X(x_i) = \frac{1}{n}$ and the expected value is

Thus, in this case, the expected value (which is the average of observations over multiple runs of the experiment) is equal to the population average (mean weight of a student in the class).

Expected Value gives an average (central tendency) of the probability distribution. But how do you measure the spread of the distribution?

One way to measure the spread is the range (highest possible value - lowest possible value). But this is severely affected by outliers. Thus, other measures like Quartiles and Percentiles are often used. Percentiles give us the flexibility of discounting as many outliers as required. However these measures still don’t tell us how the observations are distributed around the mean value. How do you measure how close are the actual observations to the Expected Value? The solution is given by Variance.

Variance measures the average squared distance of a Random Variable from the Expected Value (over multiple trials). It quantifies the amount of randomness that is present. Together with the expected value, the variance summarizes crisply the properties of a PMF. 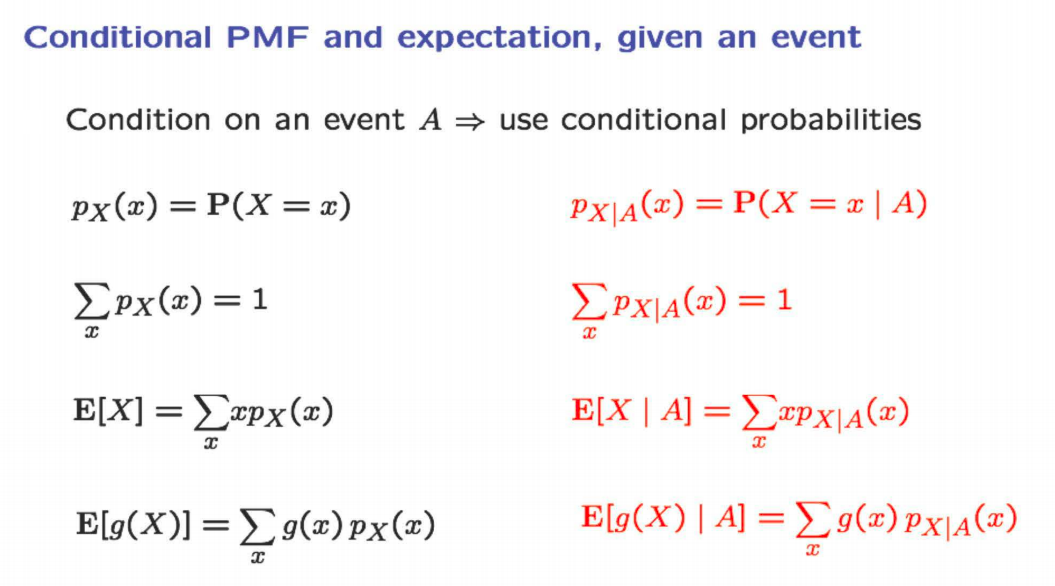 Using this property we can derive the Expected Value of a Geometric Random Variable $X$.

Joint PMF of two different random variables $X$ and $Y$ is given by:

The following properties are obvious:

Using the above properties, we can prove the linearity of expectation over multiple random variables.

The above property can be used to derive the Expected Value of a Binomial Random Variable $X$ with $n$ trials and $p$ probability of success. Let $X_i$ denote the result of $i^{th}$ trial. Then,

Conditioning on other RVs; Independence of RVs; Hat Problem

Most conditional identities translate as is for PMF conditioned on another random variable:

Equivalently, we can say that

if and only if $X$ and $Y$ are independent random variables.

The second property can be used to derive the variance of a Binomial Random Variable $X$ with $n$ trials and $p$ probability of success. Let $X_i$ denote the result of $i^{th}$ trial. Then,

In the hat problem, $n$ people throw their hats in a box and then pick one at random. At the time of retrieving hats, all permutations of the hats are equally likely. Let $X$ be a random variable, denoting the number of people who get their own hat back. We want to find the $\expect[X]$.

Also there is some subtlety involved here. First the random variable $X$ (denoting total num of men receiving their own hat) and random variables $X_1, X_2, X_3, \dots, X_n$ etc. all map the outcomes of the same experiment to the number line. The experiment is that each person is assigned a hat. $X_i$ takes each hat permutation and assigns it $1$ if the $i$-th person received his own hat. $X$ takes each hat permutation and assigns it $k$ if in all $k$ people got their hat back.

Now, how do we find $\expect[X]$? We use the Linearity of Expected Value theorem.