Probabilistic modeling can usually be broken down into three basic steps:

Based on this the probability of an event $A$ consisting of outcomes $s_1, s_2, \cdots, s_k$, is given as follows:

Similar rules apply for continuous models, where instead of talking in terms of particular outcomes, we talk in terms of intervals.

The probability of the outcome belonging to an event $A$, given we already know that event $B$ has occurred, is called the conditional probability of $A$ given $B$, denoted by $\prob(A \mid B)$. It is obvious that 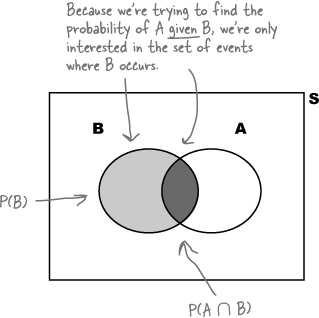 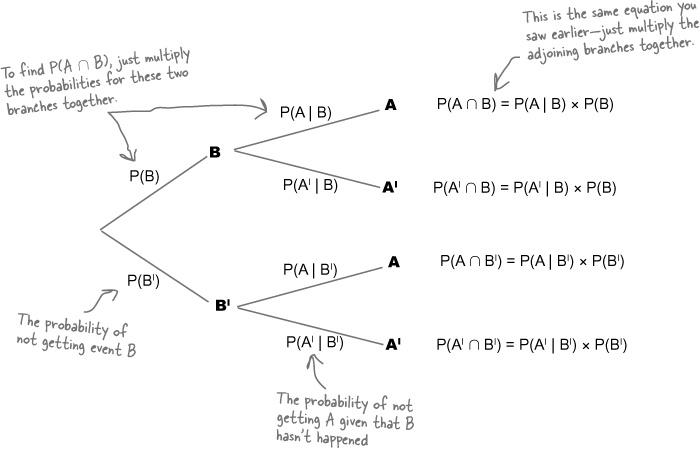 This is called the Sum Rule in Probability Theory.

Bayes’ Theorem is derived directly from the definition of Conditional Probability. To get a background on Bayesian Inference go through Lec 2.5. Basically we have an event $B$ (which can be recorded/measured, like generation of alarm by a radar). Based on that, we try to infer which condition was true when $B$ happened: $A_1$ (aircraft was present), $A_2$ (goose was present), $A_3$ (the sky was clear) and so on. Therefore we try to calculate $\prob(A_1 \mid B)$, $\prob(A_2\mid B)$, etc.

We have introduced the conditional probability $\prob(A \mid B)$ to capture the partial information that event $B$ provides about event $A$. An interesting and important case arises when the occurrence of $B$ provides no such information and does not alter the probability that $A$ has occurred, i.e.,

When we substitute the above equation into the formula for conditional probability $\prob(A \mid B) = \frac{\prob(A \cap B)}{\prob(B)}$, we get

Because the above formula is symmetric in $A$ and $B$, we can use it as an alternate definition for independence. Two events are independent if their joint probability (probability of their intersection) is equal to the product of their individual probabilities.