Till now we have only worked with square matrices and linear systems with as many equations as the number of unknowns. Now we step into the realm of non-square matrices. These notes are majorly derived from MIT OCW 18.06 Series.

Matrix Rank: The rank of $A \in \mathbb{R}^{m\times n}$, denoted by rank$(A)$, is the maximum number of linearly indepedent columns of $A$. 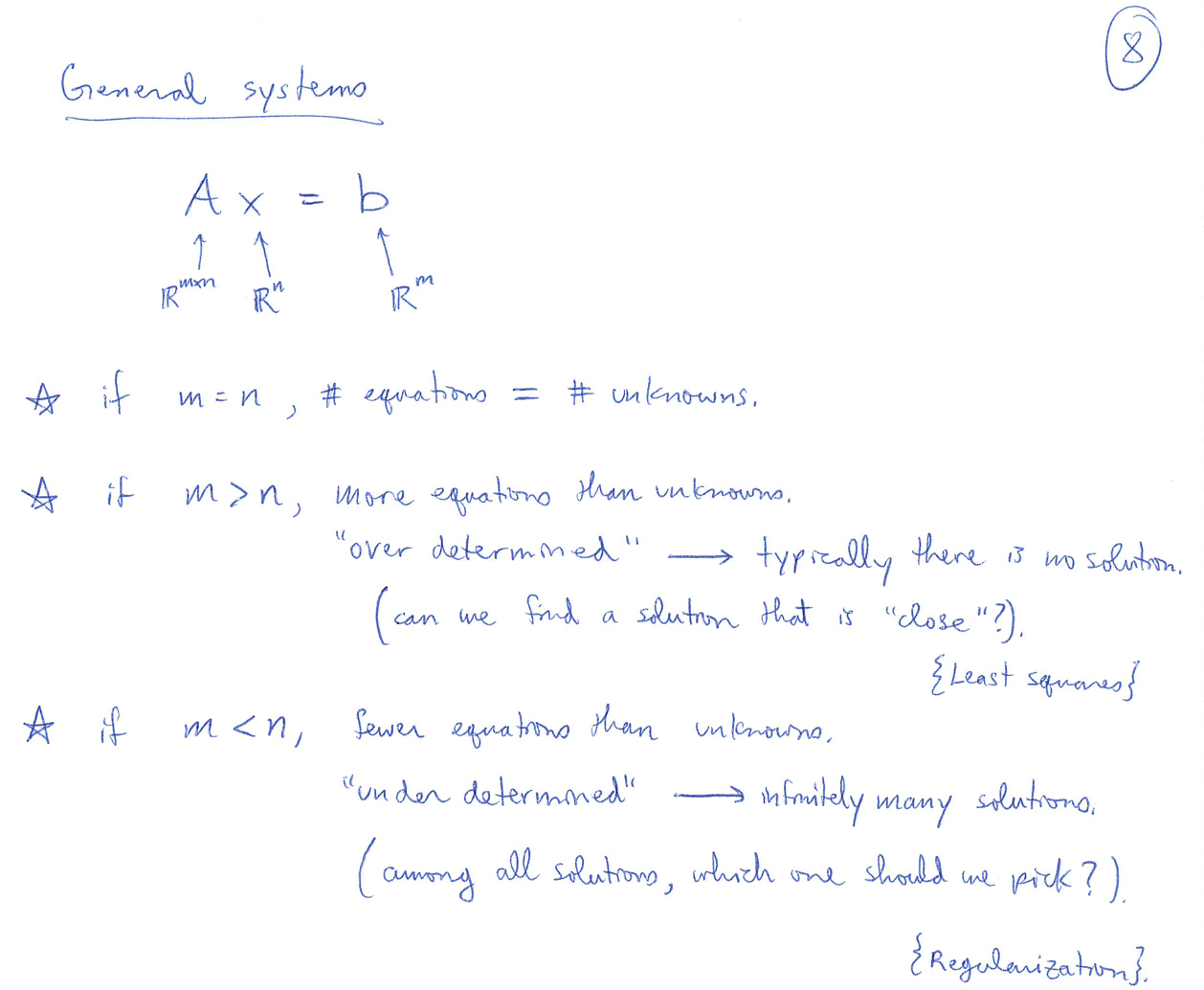 First let us reiterate what we have learnt till now. We studied the case where $A$ is a square matrix. We initially talked about the case where the diagonal elements in the upper triangular form are non-zero (with or without row permutations). In this case, the nullspace is just ${\bt{0}}$. The column space is $\mathbb{R}^n$ and the solution to $A\bt{x} = \bt{b}$ is given by $\bt{x} = A^{-1}\bt{b}$. Then we talked about the case where the $i^{th}$ diagonal element is zero. In this scenario, if $i^{th}$ and $(i+1)^{th}$ equations reduce to the same thing, then there are infinitely many solutions possible; if not, then there are zero solutions. Either ways $A$ is non-invertible if diagonal elements are $0$. The diagonal elements are responsible for satisfying their respective row equations. If a diagonal element in the upper triangular form is $0$, then the corresponding variable can take any value freely (in case some solution does exist). Therefore, these diagonal elements of $U$ are called pivots (as they are pivotal in deciding the value of the corresponding variable).

Now we try to generalize the above-mentioned technique to non-square non-invertible matrices. First we discuss how to find the null-space and then we focus on the column space.

The pivots are the first non-zero elements in their respective rows. Below each pivot is a column of zeros. Each pivot lies to the right of the pivot in the row above it. Every row in row-echelon form either has a pivot-element or is a row of only zeros. The pivot elements decide the value of the corresponding variables. Hence the name “pivot elements”.

Remember that performing row eliminations on a matrix doesn’t change the null-space of the matrix. This is because applying same row operations on $\bt{0}$, we can only get $\bt{0}$.

Let $R$ be the RREF for $A$. If we move all the pivot columns to one side of the matrix, then $R$ can be represented as: 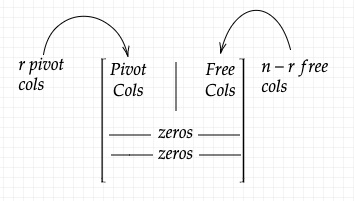 Removing the zero rows and expressing pivot columns as Identity Matrix, we get:

Basically each non-zero linear equation above gives directly the value of a pivot variable if we substitute arbitrary values for free variables. All \(\bt{x} = \mat{\bt{x_{pivot}}\\\bt{x_{free}}}\) that satisfy the above equation fall in the null space of $A$. The subspace \(\{\bt{x} \in \mathbb{R}^n\;\mid\;A\bt{x} = \bt{0}\}\) has dimension equal to the number of free variables. Why? Because though $\bt{x}$ in a $n$-D vector, only $n-r$ of its co-ordinates can change freely. So $\bt{x}$ has to lie on a $n-r$ dimensional hyperplane inside $\mathbb{R}^n$. Need a more rigourous proof? Proof $\mid$ Khan Academy

We have already proved a very important property about the dimension of the column space of $A$:

We also saw that the row reduced echelon form of $A$ is of the following form:

It is easy to catch the geometric intuition for this property. Roughly speaking, the column vectors in $A$ either contribute to the column space (range) of $A$ or map to $\bt{0}$. All dimensions are accounted for.

These notes by Prof Laurent Lessard also give a very clear explanation of how to solve $A\bt{x} = \bt{0}$ and $A\bt{x} = \bt{b}$. Finally, go over the Four Fundamental Subspaces as explained in this note.