Within the field of statistics there are two prominent schools of thought, with opposing views: the Bayesian and the Classical (aka Frequentist).

In Bayesian view, the unknown variables are treated as random variables with known prior distrubtions. We conduct an experiment, make some observation $X$, and then try to infer the value of the random variable $\Theta$ during the conducted experiment. We derive a posterior distribution $P(\Theta \mid X)$ which tells us how likely it is that $\Theta = \theta$ when the observation $X$ was made.

By contrast, in Classical Inference, the unknown quantity $\theta$ is viewed as a deterministic constant that happens to be unknown. It then strives to develop an estimate of $\theta$ that has some performance guarantees (confidence interval). Suppose that we are trying to measure a physical constant, say the mass of the electron, by means of noisy experiments. The classical statistician will argue that the mass of the electron, while unknown, is just a constant, and that there is no justification for modeling it as a random variable. The Bayesian statistician will counter that a prior distribution simply reflects our state of knowledge. For example, if we already know from past experiments a rough range for this quantity, we can express this knowledge by postulating a prior distribution which is concentrated over that range.

A classical statistician will often object to the arbitrariness of picking a particular prior. A Bayesian statistician will counter that every statistical procedure contains some hidden choices. Furthermore, in some cases, classical methods turn out to be equivalent to Bayesian ones, for a particular choice of a prior. By locating all of the assumptions in one place, in the form of a prior, the Bayesian statistician contends that these assumptions are brought to the surface and are amenable to scrutiny.

In classical inference we treat the unknown parameter as an unknown constant ($\theta$) rather than a random variable ($\Theta$). The observation $X = (X_1, X_2, \dots, X_n)$ is a random variable, whose probability distribution depends on the value of $\theta$. This probability distribution is denoted by $p_X(x;\theta)$. Remember that this indicates that $p_X$ is dependent on $\theta$, not that it is conditioned on $\theta$ in the probablistic sense.

There are two types of tasks in classical inference:

We will study Classical Estimation by trying to estimate the mean of a random variable. Suppose $X_1,X_2,\dots,X_n$ are i.i.d. (independent identically distributed) random variables drawn from a Gaussian Distribution with mean $\theta$ and variance $\sigma^2$. Parameter $\theta$ is unknown and we want to estimate it using classical statistics.

We can take our estimator to be $g$, where

The desirable properties of any estimator $g$ are as follows:

Mean Squared Error of an Estimator

In the previous example, our bias was zero. So,

If we take a dumb estimator which always gives out an estimate of 0, irrespective of the observation, then

Generally, the task of Parameter Estimation includes reporting the $MSE$ or $\sqrt{MSE}$, along with designing and implementing an estimator with most of the desirable properties.

The value of an estimator $\hat{\Theta}$ may not be informative enough on its own. One common practice is to provide the standard error along with the estimate. Another technique is to specify a confidence interval.

We have mentioned beforhand that $\theta$ is not a random variable. Then how does probability of $\theta$ lying in an interval make sense? It makes sense because $\hat\Theta_-$ and $\hat\Theta_+$ are random variables. The probability is the likelihood of our range being correct, not the likelihood of $\theta$ taking up a particular value. Suppose that after the observations are obtained, the confidence interval turns out to be $[-2.3,4.1]$. We cannot say that $\theta$ lies in $[-2.3, 4.1]$ with probability $0.95$, because the latter statement does not involve any random variables; after all, in the classical approach, $\theta$ is a constant.

Suppose that the observations $X_i$ are i.i.d. normal, with unknown $\theta$ and known variance $\sigma^2$. We want to find a $95\%$ confidence interval for $\theta$. Then the sample mean estimator

We can rewrite this as

then $\hat{\Theta}$ can be taken to be the sample mean

But what if there is no apparent way of treating $\theta$ as an expectation of $X$? In that case, we will use the approach of Maximum Likelihood Estimation. We will pick $\theta$ that makes the data most likely

Operationally, Maximum Likelihood Estimation is quite similar to Bayesian Estimation. There we try to pick a value of $\Theta$ for which the posterior probability $p_{\Theta \mid X}$ is the maximum. If you take the prior to be equal for all $\Theta$, then the MAP Bayesian Estimator would be the value which has maximum likelihood probability $p_{X \mid \Theta}$ (using Bayes’ Rule). Maximizing $p_{X \mid \Theta}$ is similar to maximizing $p_X(x ; \theta)$ in Classical Inference.

Finally we study an example of Maximum Likelihood Estimation, where we try to estimate the bias of a coin, given we get $K$ heads on tossing the coin $n$ times. The first step is to write the likelihood function of data

To maximize this expression, we take the derivation with respect to $\theta$, which leads to the following formula:

Lec 20.10 goes over this example. It also discusses how to derive Maximum Likelihood estimate for the mean of a Gaussian Distribution. We see that for this mean inference problem, $\hat\Theta_{ML}$ is the same as the estimate that we obtained earlier using the estimator $g(X) = \sum{X_i}/n$

Binary Hypothesis Testing is an inference problem where $\theta$ can take just two values. For historical reasons, we forgo the $\theta$ notation and denote the two hypotheses as $H_0$ and $H_1$. $H_0$ is often called the null hypothesis and $H_1$ the alternative hypothesis. $H_0$ plays the role of a default model, to be proved or disproved on the basis of available data.

The available observation is a vector $X = (X_1,\dots,X_n)$ of random variables whose distribution depends on the hypothesis. $\prob(X \in A ; H_j)$ denotes the probability that the sample $X$ belongs to a set $A$, when hypothesis $H_j$ is true. Again $\prob(X \in A ; H_j)$ does not denote conditional probabilities. We want to find a decision rule $g$, that maps the realized values $x$ of the observation to one of the two hypotheses.

Any decision rule can be represented by the partition of the set of all possible values of the observation vector $X$ into two subsets, a set $R$ called the Rejection Region, and its complement $R_c$, the Acceptance Region. Hypothesis $H_0$ is rejected if the observation lies in the rejection region and accepted otherwise. Thus choosing a decision rule is the same as choosing a rejection region.

For a particular choice of the rejection region $R$, there are two possible types of errors:

Let us define the Likelihood Ratio $L(x)$ as follows:

We define the rejection regions as follows:

$\xi$ is called the critical value. The special case where $\xi = 1$ corresponds to the maximum likelihood rule.

Note that choosing $\xi$ trades off the probabilities of the two types of errors. As $\xi$ increases, the rejection region becomes smaller. As a result, the false rejection probability $\alpha(R)$ decreases while false acceptance probability $\beta(R)$ increases. Because of this trade-off there is no single best way to choose $\xi$. The most popular approach is as follows:

Hypothesis testing problems encountered in realistic settings do not always involve two well-specified alternatives, so the methodology in the preceding section cannot be applied. The purpose of this section is to introduce an approach to this more general class of problems.

Consider problems such as the following:

In all of the above cases we are dealing with a phenomenon that involves uncertainty, presumably governed by a probabilistic model. We have a default hypothesis, usually called the null hypothesis, denoted by $H_0$, and we wish to determine on the basis of the observations $X = (X_1 ,\dots, X_n)$ whether the null hypothesis should be rejected or not.

We will mostly restrict the scope of our discussion to situations with the following characteristics:

We introduce the general approach through a concrete example.

where $\xi$ is a suitable critical value, to be determined. We finally choose the critical value $\xi$ so that the probability of false rejection is equal to a given value $\alpha$:

$\alpha$ is called the significance level, is a small number.

We summarize and generalize the essence of the example as below 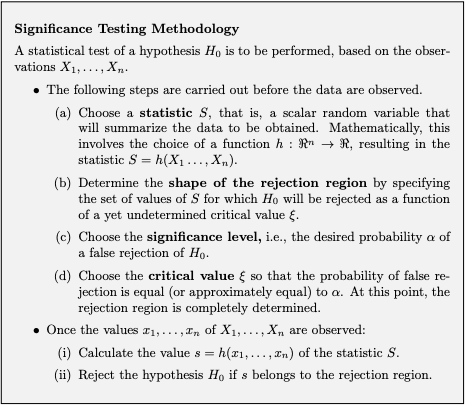 Given a value of $\alpha$, if the hypothesis $H_0$ ends up being rejected, one says that $H_0$ is rejected at the $\alpha$ significance level. It does not mean that the probability of $H_0$ being true is less than $\alpha$. Instead, it means that when this methodology is used, we will have false rejections a fraction $\alpha$ times. Rejecting a hypothesis at the 1% significance level means that the observed data is highly unusual under the model associated with $H_0$; such that the data would arise only 1% of the time, and thus provides strong evidence that $H_0$ is false.

Quite often, statisticians skip steps (c) and (d) in the above described methodology. Instead, once they calculate the realized value $s$ of $S$, they determine and report an associated p-value defined by

Equivalently, the $p$-value is the false rejection acceptance rate for which $s$ would just get rejected. Thus, for example, the null-hypothesis will be rejected at the 5% significance level if and only if the $p$-value is smaller than 0.05.